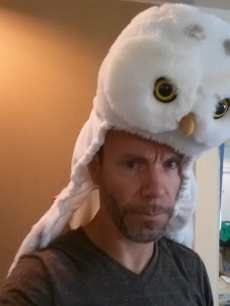 Royden (thus the R) has been a professional actor and Early Childhood teacher – all while being a proprietor of delectable tales. Royden is a product of Star Wars, Jim Henson, ninjas and Edward Gorey, with periods of subversive study of the Loch Ness Monster. Fortunately, he’s matured into a serious, often dour gentleman who takes to sitting in dark rooms composing sonnets about the various uses of outdated footwear. He bemoans the fact that he’s lost his falsetto and thus can no longer imitate old ladies while phoning in take-out. He currently resides in Colorado, but at heart is a New Yorker. Royden is a member of the Society of Children’s Book Writers and Illustrators.

Here is an article about an author visit I had last December. Thanks Anne-Claire Siegert!

Inspiration can happen in the most unlikely places. For Colorado Academy Pre Kindergarten teacher Roy Mills, it was 12 years ago during a flight where, in his own words, his fear of heights made him pull a blanket over his head. Inside his head, however, between the fears of looking out the window and that of a looming plane crash, his vivid imagination conjured a slightly different scene.

“This is where this whole creative process started for me,” he says to a room full of fascinated CA third graders, their mouths agape and eyes fixed on Mills. “I immediately saw a little bed and in the bed was a little boy. It was the middle of the night; blue light, and then the lights went out: pitch dark. The lights came up. I saw this boy, and then a long arm with these big red claws reaching for the boy. Lights went out. Lights came back. Now the arm was even higher above the boy’s bed and there’s a body behind it—a huge, black furry monster with red eyes, and he’s lowering down on the boy. Lights go out. Lights come back: There’s the boy in the bed; monster’s gone. Lights go down. Lights come back: The bed is empty, the monster’s gone; start of the play.”

What began as an opening scene for Mills—whose first career was that of a professional actor—evolved into drawings, a script, puppets and finally a book titled Manchewla the Gorger. As he walks across the room from side to side, animated in his explanation, he talks to Lower School students about that creative process.

“I thought: What does it mean—this scene?,” he says. “I had to figure out what it was.”

Mills got to work making sketches of the characters. He holds up one of those drawings, inspiring laughter amongst the students. It’s a monster called Doper Frazzle, a dopey looking thing with a buzz cut and overalls whose voice sounds like that of Arnold Schwarzenegger.

Doper Frazzle lives in a fictional village of monsters that aren’t of the menacing variety. In fact, the village is known for being an ideal place to live. That is, until kids start being stolen from their beds in the night. The story is about what happens in the village when an unknown monster starts taking children.

Because of his idea that puppets are “limitless,” Mills got to work turning his sketches into puppets for use in a play.

“We started with an idea. We made sketches; turned it into a play; the play turned into puppets, but we didn’t have the money to put it on. And then my wife one day out of the blue said, ‘Turn it into a children’s novel.’”

Putting down the puppet of Doper Frazzle, he holds up the 152-page manuscript intended for 9-13 year olds. On its cover reads Manchewla the Gorger. “I had no business writing a children’s novel other than I like to read,” he says. “But I went through the creative process anyway, and you can, too.”

In fact, creativity—the ability to dream and create things that we imagine—is one of the most critical skills for the future. A popular survey conducted by IBM of 1,500 CEOs from 60 countries and 33 industries identifies creativity as the “most crucial factor for future success,” a sentiment Mills echoes while talking to the students.

“To me creating is one of the most satisfying, important things we have in this world,” Mills says. “Because when you create, you create out of nothing. You create something that did not exist until you brought it into the world. Whatever you create is completely new to the world. It is entirely yours.”

As Mills explains that he’s working with an agent to get the book published, the students draw pictures of their own monsters in their composition books.

One girl looks up from her sketch to ask a question. “Is this at Barnes & Noble?” she asks. “I’d like to know how it ends.”

One thought on “R Sinclair Mills – About and News”

Leave a Reply to Jami (melissa and ryan) Cancel reply

This site uses Akismet to reduce spam. Learn how your comment data is processed.